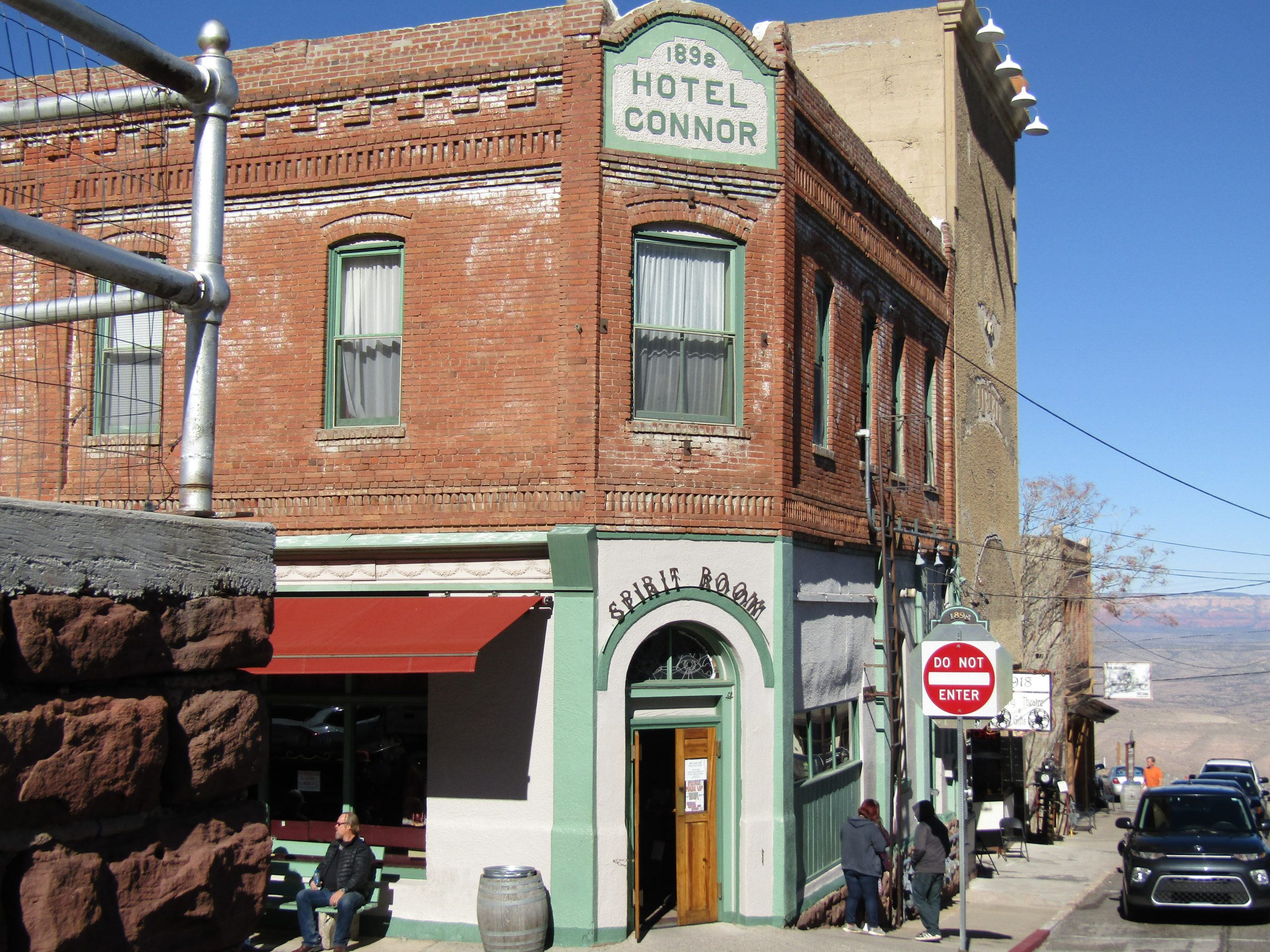 My husband and I wanted to take a short adventure trip and decided to go to Jerome, Arizona. Jerome is a small town in central Arizona located on top of Cleopatra Hill between Prescott and Flagstaff is Jerome, Arizona’s historic copper mining town. Back in the 1880s, Jerome was a large copper mining town. It has a wild history and was once called the “Wickest Town of the West.”

When founded in 1876, Jerome became the fourth largest city in Arizona, and the population peaked at approximately 15,000 in the 1920s. The Great Depression slowed the mining operation, and the claim eventually went to Phelps Dodge, who still holds the share to this day. World War II significantly increased the demand for copper, but the demand for copper decreased dramatically after the war. Jerome’s economy was primarily dependent upon the need for copper; Phelps Dodge Mine closed in 1953, with less than 100 residents, and they started promoting the town as a historic ghost town. In 1967 Jerome was designated a National Historic District by the federal government.

Jerome is thriving with tourists and artists and has approximately 450 residences. It is one of America’s largest ghost towns. The drive up the mountain is winding, curving, and uphill, and the views are breathtaking. It is a mile high in elevation. You will see a sign within the town indicating the height. When we arrived in Jerome, we wanted to find parking close to the hotel. It was a Sunday, with lots of tourists, so we parked in the paid parking area.

We checked into the Connor Hotel of Jerome. The hotel has been around since 1898. Our stay was in Room 1, which is in the hotel’s corner section with the windows facing two directions. What a beautiful room with antique furniture. The room is known for being haunted.

I had plugged in my phone charger and was freshening up in the bathroom, and Tom was lying down on the bed taking a nap. While I was in the bathroom putting on makeup, he called out to me, “Patti, what did you say?” I replied I didn’t say anything. He said, I heard your voice; I said it wasn’t me.

Tom was still lying on the bed with his eyes closed, and I noticed my phone charging cord was unplugged from the wall. I thought that is weird. Later that night, I asked Tom about it, and he didn’t unplug it.

That evening we went on a local ghost tour, and one of the places that the tour guide took us was outside our hotel. He told the hotel’s story of burning down twice and restored and that guests who stay in the hotel have had unexplained electrical occurrences, fathom ghost dog barking and hearing a women’s voice.

We didn’t hear a fathom ghost dog barking. Connor Hotel of Jerome is dog friendly, and we did see other guests accompanied by their dogs.

That night while in bed, I felt my legs touched throughout the night. Tom woke up with the feeling of his legs held down firmly as well.

Do I think the hotel’s haunted?
From our experiences in the hotel, yes, I do. Whether you believe in ghosts or not, the hotel is enchanting.

Would we go back again?
Most definitely, Jerome is one of our favorite places to visit.

It was a short visit, and most of the other times, we stay for at least two days. Walking around the town, shopping, eating, wine tasting, and most of all, the ghost tours.

Jerome has a variety of shops, restaurants, and lodging. If you enjoy wine tasting, Jerome has some wine tasting venues. Other places to explore in the surrounding areas are the Arizona Verde Valley, Cottonwood, Clarksdale, Camp Verde, Prescott, Prescott Valley, and Sedona. In future blog posts, we will explore some of these places and possibly more of Jerome again.

I would love to hear if you have been to Jerome, Arizona and what was your experience was like?

2 thoughts on “A Day And Evening Travel Adventure In Jerome, Arizona!”